UCU members may remember the BUCU report on gender and governance which compared the compositions of the Executive Boards, Senate and Councils (or equivalents) of Russell Group Universities for the academic year 2012-13.

Our University did not do very well in this comparison. It was ranked 24th out of 24 both for Senate and Council and 18th out of 24 for the Executive Board.

Two years on and after the Year of Equality, we thought it would be interested to see what, if any, progress has been made (all information on UEB, Council and Senate was taken from the University of Birmingham’s website on the 15th April 2015).

In 2012-13, out of the thirteen members of the University Executive Board, ten were male (77%) and three were female (23%). Since then, four people (2 men and 2 woman) have left their posts and have been replaced by three men and one woman.

We are therefore now in a situation where UEB comprises eleven men (85%) and two women (15%).

BUCU awaits with baited breath to see what happens with the two vacancies that have arisen this academic year.

This would place the University, ceteris paribus, joint 14th out of 24 in the 2012-13 Council rankings.

This would again place the University, ceteris paribus, joint 14th out of 24 in the 2012-13 rankings.

However, this total figure does not tell the whole story. If we look at the breakdown of Senate membership in Table 2, we can see that the increase in the percentage of female members is being driven almost entirely by an increase in the number of elected female members (55% now in comparison to 30% in 2012-13). Male and female Ex Officio membership remains the same and the number of women who have either been nominated by Heads of College or co-opted by the VC has risen from one to two.

Thanks to the Times Higher Education and their annual pay survey, we are now in a position to compare the gender pay gap for Russell Group Universities. As can be seen in Figures 1 and 2, in this regard, the University of Birmingham is doing pretty well.

At the professorial level, female professors are paid just under one percent less than their male counterparts are. This is much lower than the average professoriate gender pay gap for Russell Group universities. Birmingham are ranked 4th out of 24 in this regard.

Looking at academics as a whole, the picture is less rosy. The gender pay gap for the University of Birmingham is nearly 15%. This is quite a large gap but only very slightly above average for the Russell Group. Birmingham are ranked 12th out of 24 in this regard. 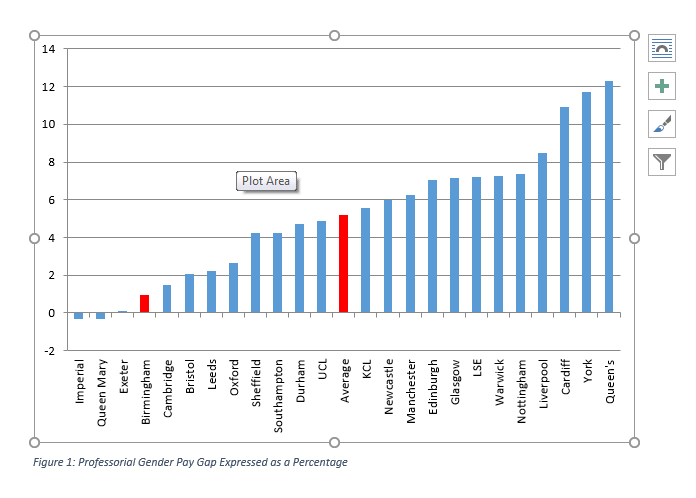 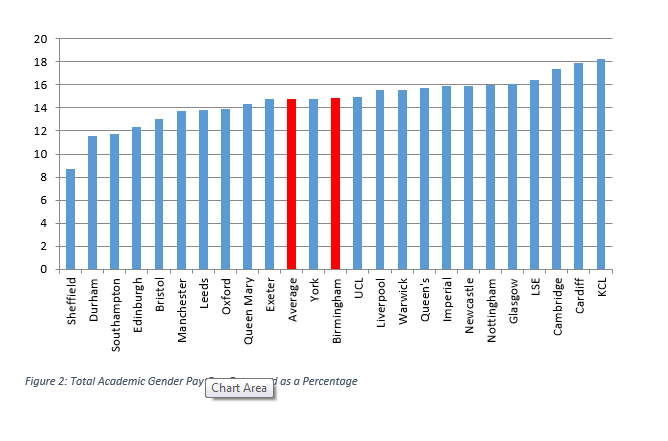 However, before we get too congratulatory on pay and uncork the champagne, let us have a closer look at the pay of ‘other senior academics’ across the Russell Group.

Figure 3 shows us the average pay of all members of staff within the ‘Other Senior Academic’ category for each Russell Group university (Cambridge and Newcastle are not included in the data below because no figures were provided for these institutions in the survey). The figure for Birmingham is £154,218. This is by far the highest figure and completely out of kilter with other Russell Group universities. The Birmingham figure is £56,625 higher than the average and £34,521 higher than the second institution on the list, University College London. Indeed, if the figures took into account London weighting, the difference between Birmingham and the rest would be even wider.

This picture perhaps becomes even clearer if we look at Figure 4 which shows the percentage difference from the average figure for all Russell Group universities (the green lines indicate the boundaries of standard deviation). Birmingham sticks out like a very sore, very big and very much overpaid thumb.

Under any circumstances, this situation would be notable and of deep concern. Given that, under current circumstances, the University of Birmingham is still not a Living Wage Employer, the Barber Institute has recently been named and shamed for not paying the minimum wage, University senior management receive consistently poor results in the Staff Have Your Say Survey, and redundancies and cutbacks are taking place across the University, these figures are both absolutely inexplicable and utterly disgraceful. They also suggest that the University’s Remuneration Committee should be sacked in its entirety and that the Council should seriously consider whether it is undertaking properly its duties with regard the oversight of finances, budgets and performance within the University of Birmingham. 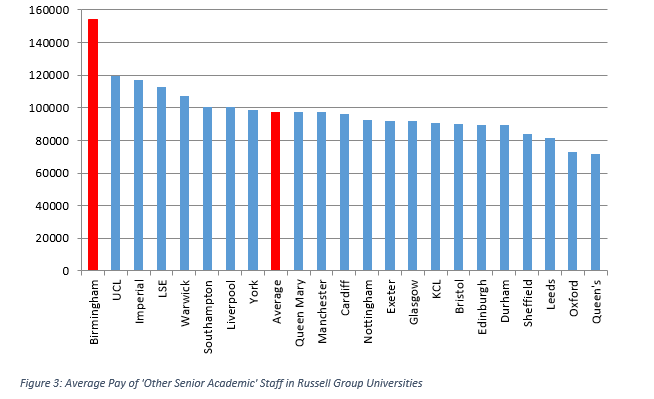 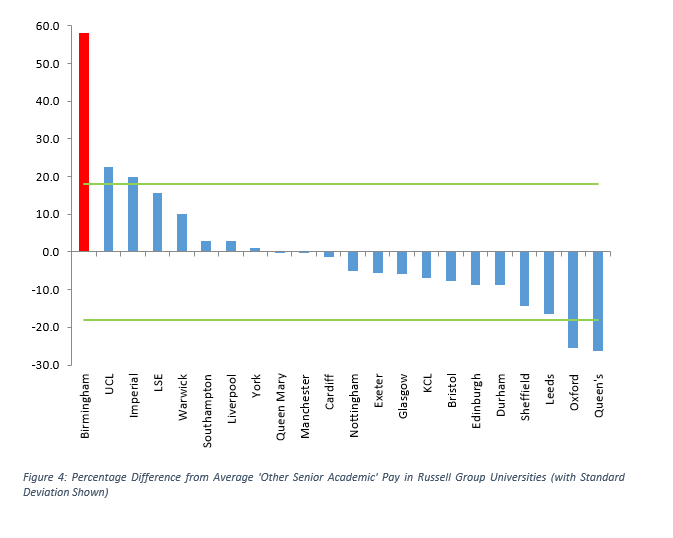