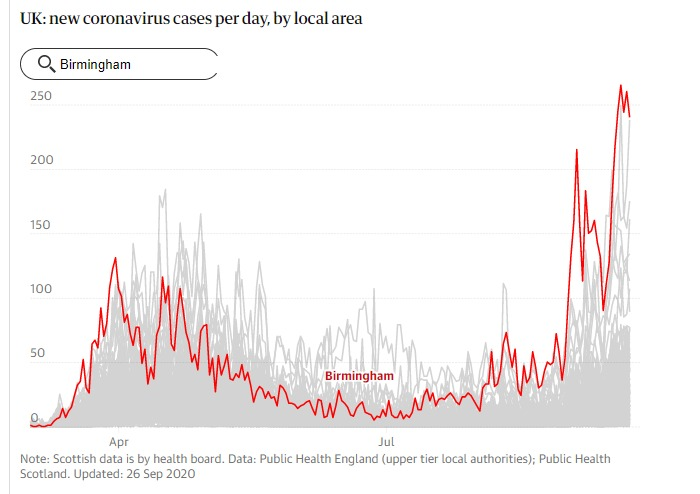 The scientific advice is strongly in favour of online teaching as a default option.

The report of the Independent SAGE group of experts, led by Sir David King, the former Scientific Adviser to the government, advised universities against resuming face-to-face teaching because risks of infection are too high and the view of the SAGE group of experts, that all HE institutions should expect to have cases of COVID-19 and it is highly likely that some HE providers and relevant local health agencies will have to manage the consequences of a significant outbreak.

Jeremy Farrar, Director of Wellcome Trust, member of SAGE, said only yesterday: ‘It is, of course, concerning to see the number of cases among university students…Teaching in further + HE should be online, except in those few courses where it is impossible’.

The Sage group has made clear that “All HE institutions should expect to have cases of COVID-19 and it is highly likely that some HE providers and relevant local health agencies will have to manage the consequences of a significant outbreak either directly associated with their setting or within their local community or region”, and that, “there are a higher proportion of asymptomatic cases among younger age groups, meaning that cases and outbreaks are likely to be harder to detect among student populations”.

With all of the above in mind, there is no obvious reason to risk on-campus teaching given that teaching/working as a default is clearly reasonably practicable and therefore would make a massive impact in terms of reducing unnecessary risk.

The University of Birmingham should be aware that in dealing with risk in the workplace, risks should be reduced to the lowest reasonably practicable level by taking preventative measures, in order of priority, with eliminating the risk at the top of the list and providing personal protective equipment (PPE) as the last resort. It is a breach of health and safety law for an employer to move straight to PPE without considering other ways of eliminating or reducing risk to health and safety. There is a very straightforward and easy way to eliminate the risk almost entirely: move to online teaching/working as a default. This has very little costs associated with it. According to the University of Birmingham’s own website, teaching online is an effective way to teach.

As such, it would clearly be reasonably practicable to move to online teaching/working as a default option in order to eliminate a very large amount of risk of infections.

In the light of all of the above, we insist that the University should move immediately to online teaching/working as a default for all staff. We do not believe the University campus to be a safe workplace.