Last week Vice Chancellor Sir David Eastwood’s appearance at the Guild’s Question Time event left students bemused and disappointed by a string of evasive and vacuous responses, with one student concluding to the Tab: “most of us were hopeful that this would be a real chance to raise serious questions with management, and to have our voices heard; however, what we were given instead was an utter farce”.

He was joined on the panel by Pro Vice Chancellor for Education Kathy Armour, Academic Registrar Stephen McAuliffe, and Paddy Jackman, Director of Hospitality and Accommodation Services.

Throughout the event students attempted to raise a wide range of issues from mental health services, to the new Dubai campus, international student fees, the cost of living, to hate speech on campus, with one student characterising their responses from the panel as “repeatedly refus[ing] to acknowledge or take a stand on vital issues”.

Casualisation also repeatedly came up with both the Vice Chancellor and the Pro Vice Chancellor at one point seeming confused over the extent of the issue when a PhD student asked about the University’s persistent failure to recognise and pay for work done by PGTAs.

Similarly, in his response to a number of questions of the University’s welfare provision the Academic Registrar Stephen McAuliffe made the worrying statement in defence of the lack of fully accredited trained counsellors at the University (with just 4 full time fully accredited posts): “We default to the position that we need more counsellors… but the best way to support students is not just counselling”. Instead, the Registrar appeared to suggest that “going for a walk” might in some cases be more appropriate.

But perhaps the biggest moment of consternation came as it became clear that the chair could only take 2 questions on Dubai, cutting the final third of the session off after just ten minutes. In his responses the Vice Chancellor again failed to explain how staff or students would be protected on the new campus and instead suggested that because most students on the new campus would be from the Middle East that LGBTQ rights and academic freedom would not be relevant.

Casualised staff and students also gave out the following material prior to the event detailing a host of ongoing campaigns: 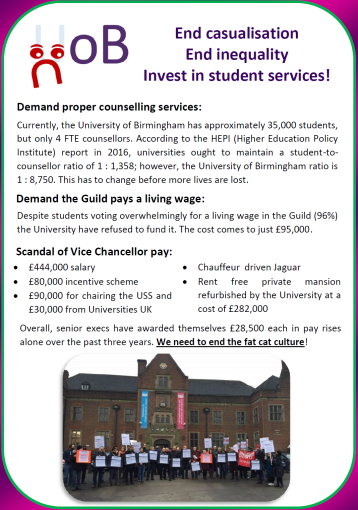